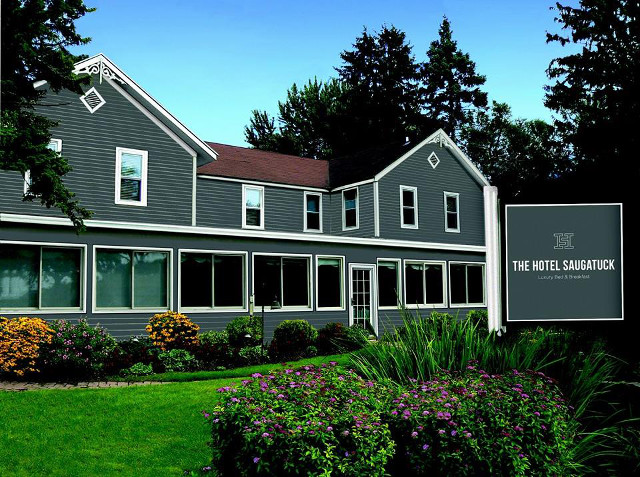 A historic building in Saugatuck has been given a contemporary, modern finish that its owner hopes will attract couples for romantic getaways.

Built in 1865, what’s now The Hotel Saugatuck started out as a mill and furniture company, according to the Saugatuck/Douglas Historical Society. Around the close of the Civil War, Samuel Clipson transitioned it to Clipson Brewery and marketed “Union Ale.” In the 1920s, it became an inn and boarding house known for its orchestra and restaurant and had reputation for being frequented by members of Al Capone’s gang during the prohibition.

The building was restored in 1982. Most recently, it housed the Twin Gables Country Inn. It was vacant for about two years before Al Heminger, owner of Huron House Bed and Breakfast and vice president of the Michigane Lake to Lake Bed and Breakfast Association, bought the property.

Heminger originally planned to open the bed and breakfast Memorial Day weekend, but is now looking at a target of Labor Day weekend. It includes 11 rooms in the main building and 6 cottage rooms. The cottages opened in mid-July.

Extensive renovations mean the hotel and three cottages will look at feel like modern, luxurious buildings.

“Blame Nicole Curtis,” said Heminger, of Kalamazoo. “I think we all watch a lot of HGTV and there’s this romantic idea of trying to bring … back something that should be brought back.”

Nicole Curtis is the star of the TV show “Rehab Addict,” which airs on HGTV and DIY Network. She specializes in home restoration in Michigan and Minnesota with a focus on structures that have been neglected.

Heminger said it would have been quicker and cheaper to build new.

“These buildings, just the amount of work that had to go into it from structural engineering to architecture — it was just amazing,” he said. “These buildings were on the verge of just needing to be demo-ed. They were in bad shape — really bad shape, especially these cottages.”

At the gateway to Saugatuck, the bed and breakfast is a key location, said Felicia Fairchild, executive director of Saugatuck/Douglas Visitors Bureau.

“I think that what (Heminger) has done is marvelous,” she said. “He’s really saved an historic building. I think that it’s going to have a very positive effect.”

She said she’s looking forward to the property opening, and praised the idea of bringing a modern concept to the 150-year-old structure.

Walton County Sued Over Denial of Bed and Breakfast Proposal