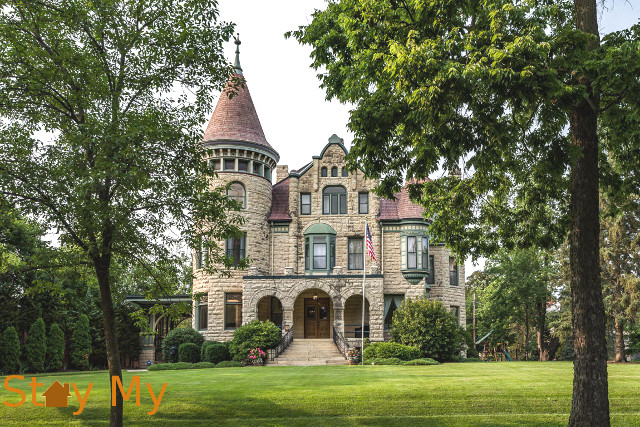 Castle on Cass has been a home of a lumber baron, a bishop, two dentists an many others, nut it could se new life as a bed and breakfast this year if a pair of entrepreneur from Texas has their way.

Bruce Banes and Brandon Rigger of the newly minted Castle La Cross LLC have a project in the works to transform the historic building into upscale lodging, just in time for its 125th birthday. The partners from Houston will go before the La Crosse Judiciary and Administrative Committee at 7:30 p.m. Aug. 30 to request a conditional use permit for the property at 1419 Cass St.

According to their application to the city, the proposed B&B would have four guest rooms available by the end of the year if the permit to allow the business in a single-family residential zone is approved.

The proposal to the city calls for the owners to live on the premises and operate the business out of their home without substantial modifications to the interior or exterior. According to a letter to the La Crosse Common Council included with the application, the business would add a fifth guest bedroom by the spring of 2017 and possibly a sixth at a later date.

There are five off-street parking spaces available, not including the two inside the garage.

The historic building, between West Avenue and 16th Street, was commissioned by lumber baron Nymphus B. Holway in 1891 to be designed in the Romanesque and Queen Anne styles. The architecture firm Schick and Stolze of La Crosse built a 7,322-square-foot home in 1892 that incorporates a short tower of local limestone with a matching carriage house, which not serves as a two-car garage.
The house has eight bedrooms and seven bathrooms. The top floor previously featured a ballroom but was renovated in 1920 by the Archdiocese of La Crosse.

The Archdiocese owned the building for 54 years, using is as a bishop’s residence, seminary and convent. To make room for the runs, the church divided the top flor into separate bedrooms. It housed about two dozen people at one time.

The property is currently owned by John and Kerrie Moore, who put it on the market in August 2015, where its listing quickly went viral online.