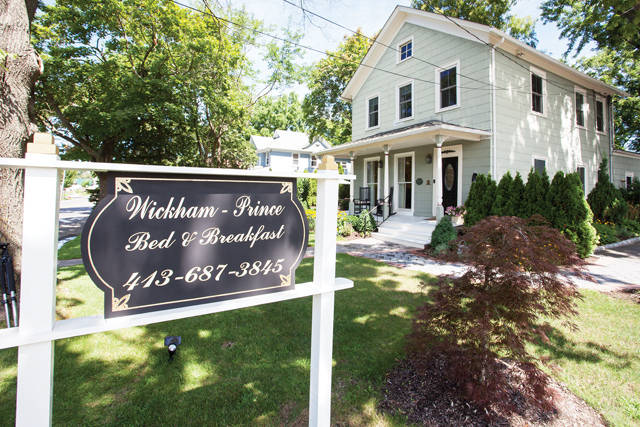 Just walking distance from Southold’s business district is a pale green 19th-century Victorian house that has been fully restored and is now open for business as a bed and breakfast.

Owners Susan and Doug Looze bought the property last year and now operate it as the Wickham-Prince Bed & Breakfast. The couple, originally from Amherst, MA, wanted to open the business as a source of income for their later years. A stay at a B&B in Calistoga, CA, in the Napa Valley, helped the to make the final decision.

“We’ve stayed in bed and breakfasts befpoe,” said Looze, a physical therapist.”We enjoy them. They seem to be more homey than going to a hotel.”

The house was built by the Wickham family in 1897 and, according to the Suuthold Historical Society, was sold soon after to Orrin and Harrier Prince, whose two children had died from diphtheria. Prince came to Southold to start over as a butcher and he and his wife were soon blessed with three more children.

The structure has housed at least one longtime business. Just before the Loozes purchased the house, it was occupied by La Panache beauty parlor.

“We were paining when a woman came by and said she used to lived there and had raised her boys there,” Looze said, referring ti Times Review Media Group contributing photographer Katharine Schroed. “This house has gone through a lot of transformations.”

Major renovations have included creating an owners’ living space on the main floor and turning the front of the house into a sitting and dining area for guests.

“We bought the house last year in November, we started renovations in January and they took through May to get done,” Looze said. “They had to open up a lot of walls and on the second floor that went nowhere and a magazine from the 1930s, which implied the wall had been opened before.

The front of the house is now an open and airy parlor with chairs and a small dining area. Looze make coffee, cereal and muffins early early in the morning, then serves a heartier breakfast of bacon and eggs or pancakes at 9 a.m. Requests are always welcome.

“I like to make breakfast and tell people what I’m serving to make sure it’s to their liking and, if not, I’ll shift things around, she said.

The property’s side yard has been converted into a patio space with deck chairs and an umbrella for outdoor seating and sunning.

Perhaps the most dynamic feature of the Wickham-Prince B&B, which opened July 1, is its location. Situated just a block north of Main Road, the property is within walking distance of restaurants and shopping. The Southold Long Island Rail Road station, meanwhile, is less than two blocks away.

“It is really good for walking. You can walk to places for dinner if you don’t want to drive,” Looze said. “There’s a lot of restaurants around here, so I think it’s a good spot. We hope it is.”

Looze is slowly easing into life as an innkeeper. She and her husband joined the North Fork B&B Association, which helped them book guests right away.

“We’re learning a lot, but it’s been good,” Looze said. “It’s been a slow ramp-up, which is OK with me because we’re just figuring everything out.”

The Loozes plan to keep the Wickham-Prince Bed & Breakfast open year-round, weekdays and weekends. The house has two guest rooms. During the high season, the Wickham, which is the larger bedroom, costs $275 a night, while the slightly smaller Prince bedroom is $225. Both have private bathrooms.

Why choose a bed and breakfast