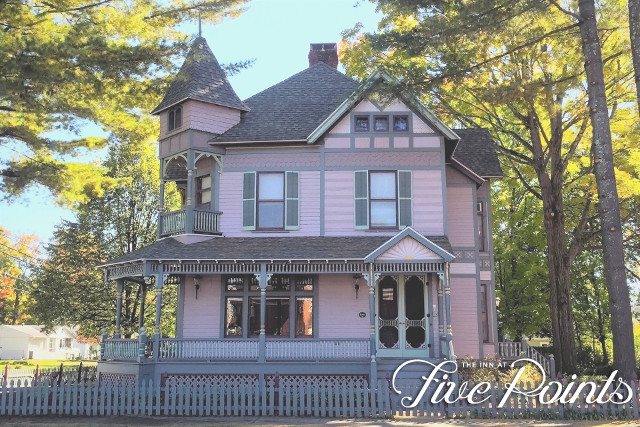 A new bed and breakfast on the block is opening just in time for vacationers to start flocking to the Spa City for the season.

The Inn At Five Points, located at 102 Lincoln Ave. in Saratoga Springs, will have a ribbon cutting ceremony and grand opening celebration with the Saratoga County Chamber of Commerce at 3 p.m. on Friday, May 6, followed by an open house from 11 a.m. to 4 p.m. on Saturday, May 7.

The historical seven0unit inn was formerly known as the Westchester House Bed and Breakfast, owned by Bob and Stepanie Melvil, who retired when it was sold to a young entrepreneurial couple Eilis and James Petrosino last fall.

The Petrosinos are currently renovating and landscaping the space, which they plan to operate year-round starting this spring.

“We wanted to make it our own,” said Eilis, who described her aesthetic vision for the inn as nouveau Victorian.

The building is a three-story, 5400-square-goot Queen Anne Style Victorian house, originally built in 1886 as the family home of master carpenter Almeran King. It was then turned into a boarding house, and then a bed and breakfast.

The inn recently began taking reservations for late May. It will officially open on the weekend of May 20, in timing with Skidmore College’s graduation ceremony.

Coming from Dutchess County, the Petrosinos had previously vacationed in Saratoga Springs, and thought it’d make a great location to start a bed and breakfast as well as personally reside and start a family.

They chose to buy the inn, which had been on the market for some time, because of its medium size and proximity to the city’s destinations including Saratoga Race Course, Congress Park, Saratoga Performing Arts Center, Saratoga Spa State Park Saratoga Casino and Raceway and downtown Saratoga Springs. “We did feel like this was extremely central to everything, which is nice,” Eilis said.

The owners are committed to making a stay at The Inn At Five points a full “Saratoga Experience.” To do that, the couple plans to source local ingredients and items to be featured on their menu, in the rooms and even in the bathrooms.

James also said that guests will also be treated to a diverse breakfast menu with fresh, local products.

Additionally, The Inn At Five Points is working on creating packages with other local businesses such as Saratoga Winery.

The Petrosinos hope that their endeavor can be part of a resurgence of bed and breakfasts that makes them more accessible to guests of all ages.

The owners sad the inn’s rates are comparable to other bed and breakfasts in the area, with on- and off-season rates.

So far in their first-ever entrepreneurial effort, “Everybody has been extremely welcoming and helpful,” James said, mentioning the city government, chamber of commerce and their neighbors. “It speaks a lot to Saratoga.”

The Inn At Five Points has on-site parking in the rear of the building which is located at the corner of Lincoln Avenue and Jefferson Street, across from Saratoga 5 Points Market & Deli.